Daily Life and Activity at Forest View -50 Years Ago!! 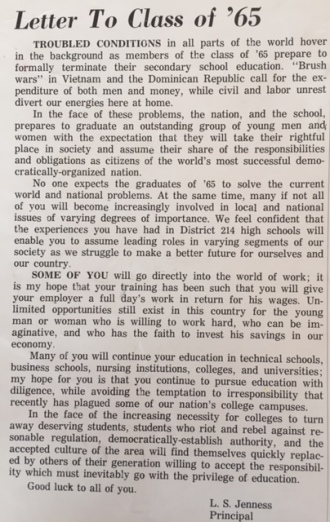 Words of wisdom from Principal Jenness

" These Seniors will be remembered as ..." 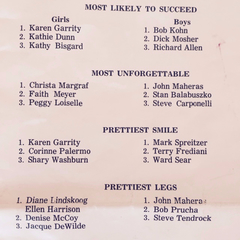 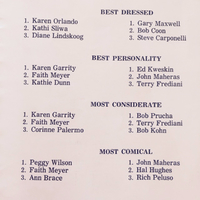 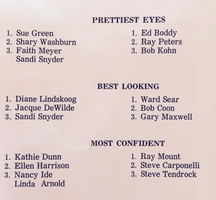 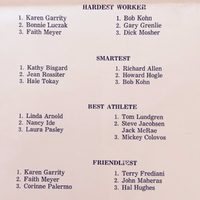 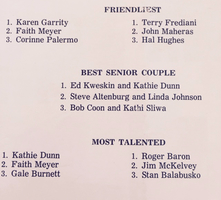 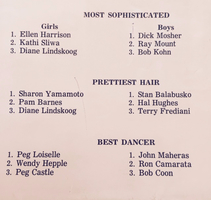 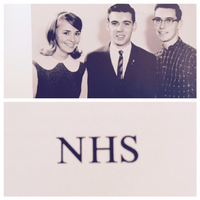 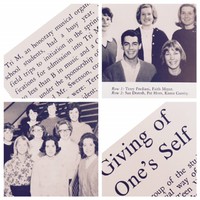 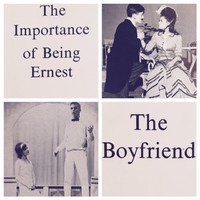 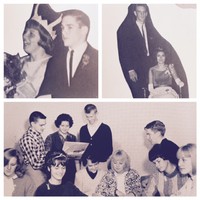 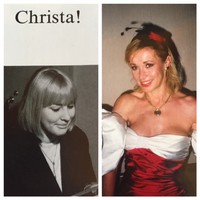 Our Foreign Exchange Student - Christa ... from Germany ...Then and 25 years later! 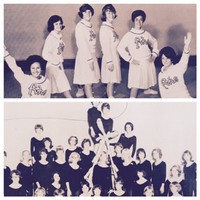 Wasn't always easy to get us to Cheer!! & Great performance from the Ladies in Orchesis! 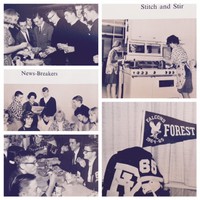 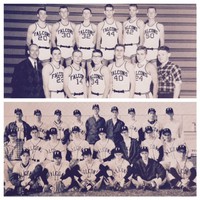 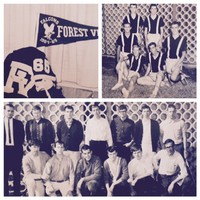 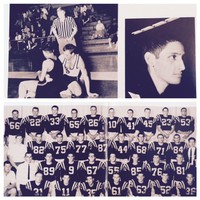 Daily Life and Activiy  Home and Abroad - 50 Years Ago!!

1965 the war in Vietnam continues to worsen as whatever the Americans do including major bombing of North Vietnam they continue to lose more men , at the same time the Anti-War movement grows and on November 13th 35,000 march on Washington as a protest against the war. There is also civil unrest with rioting, looting and arson in Los Angeles. This was also the first year mandated health warnings appeared on cigarette packets and smoking became a no no. The latest craze in kids toys was the Super Ball and The Skate Board. Fashions also changed as women's skirts got shorter men's hair grew longer as the The miniskirt makes its appearance. Hypertext is introduced for linking on the Internet. The St Louis Arch is completed and The Beatles release 4 new albums including "Help".

Check out our Television Programmes From The 60s whenever possible we have included a trailer to jog your memory. Series trailers and more information are found on the decade they started.

Northeast blackout including Parts of Canada and U.S. North East

More Information and Timeline for 1965 Voting Rights Act
1. Mid 1800's Jim Crow laws dating back to the mid 1800's were for the segregation of public schools, public places, and public transportation, and the segregation of restrooms, restaurants, and drinking fountains for whites and blacks.
2. 1963 October 7th 300 Dallas County blacks line up to register to vote in Selma, Dallas County, Alabama After waiting all day in the hot sun, only a handful of the hundreds in the line were allowed to fill out the voter application, and most of the applications were denied
3. 1964 July 2nd President Johnson signed the Civil Rights Act of 1964 into law which declared segregation illegal, yet the Jim Crow laws remained in effect.
4. 1964 November 3rd Following the election, civil rights organizations banded together to push for the passage of legislation that would ensure black voting rights once and for all
5. 1965 The voting rights movement in Selma, Alabama Launch a number of marches to bring about changes to the voting rights of African Americans
6. January 2nd Martin Luther King, Jr. addressed a mass meeting in Brown Chapel in defiance of an anti-meeting injunction.
7. February 18th C. T. Vivian led a march to the courthouse in Marion, the county seat of Perry County where state troopers rush the protesters and attack them. One of the protestors Jimmie Lee Jackson is shot and killed Alabama State Trooper, corporal James Bonard Fowler while hiding in a nearby café.
8. March 7th The first march takes place in Selma, Alabama as the marchers head east out of Selma on U.S. Highway 80 and cross the Edmund Pettus Bridge they find a wall of state troopers waiting for them on the other side, 600 civil rights marchers were attacked by state and local police with nightsticks and tear gas. Seventeen marchers were hospitalized, leading to the naming of the march as "Bloody Sunday"
9. March 8th Brutal televised images of the attack, which presented people with horrifying images of marchers left bloodied and severely injured, roused support for the U.S. civil rights movement. Newspapers and News Magazines around the world also showed similar photos which shocked the world bringing more support to the civil rights movement.
10. March 9th Federal District Court Judge Frank Minis Johnson issued a restraining order, preventing the Selma to Montgomery march from taking place until he could hold additional hearings later in the week
11. March 9th Martin Luther King, Jr. led about 2,500 marchers out to the Edmund Pettus Bridge and held a short prayer session before turning the marchers back around, thereby obeying the court order preventing them from marching all the way to Montgomery
12. March 9th later that evening three white ministers who had come for the march were attacked and beaten with clubs, The worst injured was James Reeb, a white Unitarian Universalist who died in hospital on Thursday, March 11th
13. March 15th Following the televised images and critism of U.S. civil rights President Lyndon Baines Johnson presented a bill to a joint session of Congress. The bill itself would later pass and become the Voting Rights Act. Johnson's speech in front of Congress was considered to be a watershed moment for the civil rights movement; Johnson even used the movement's most famous slogan "We shall overcome".
14. March 16th Judge Johnson ruled in favor of the protestors, saying their First Amendment right to march in protest could not be abridged by the state of Alabama.
15. March 21st 8,000 people assembled at Brown Chapel in Selma to commence the march to Montgomery
16. March 21st to 25th Between 300 and 25,000 protesters marched the 50 miles between Selma and Montgomery ( numbers were limited by the number of lanes on a highway )
17. March 25th 25,000 people marched from St. Jude to the steps of the State Capitol Building in Montgomery, Alabama where Martin Luther King, Jr. delivered his speech "How Long, Not Long."
18. August 6th the 1965 Voting Rights Act is signed into law which prohibited most of the unfair practices used to prevent blacks from registering to vote, and provided for federal registrars to go to Alabama and other states with a history of voting-related discrimination to ensure that the law was implemented.

China Chairman of the People's Republic of China Liu Shaoqi

More Information and Timeline for the Gemini Space Program
1, The Gemini Project was created with the goal of making a two-person spacecraft, testing long-term flights and weightlessness on humans, docking spacecraft with orbiting objects, and creating re-entry and landing methods all in preparation for an eventual manned mission to the moon. Half of the missions take place during 1965.
2. The Gemini I mission launches in April of 1964.
3. The Gemini II unmanned spacecraft launched as a part of the Gemini Space Program on January 19, 1965. The Gemini II craft had been scheduled to launch in December of 1964 but technical difficulties had prevented it from doing so. It had also been disassembled twice to avoid Hurricanes Cleo and Dora in August and September of 1964. Its launch was successful in its goals which included testing heat protection and structural integrity upon launch and re-entry, training controllers, and testing guidance steering among other tests.
4. The Gemini III mission launches in March of 1965 and is the first of the Gemini missions to be manned. It carried astronauts Virgil Grissom and John Young.
5. The Gemini IV mission launches in June of 1965 and carried astronauts Edward White and James McDivitt.
6. The Gemini V spacecraft launched on August 21st of 1965 and carried astronauts Charles Conrad and Gordon Cooper into orbit around the Earth. Their mission was to test long-term weightlessness and to test rendezvous procedures with other objects in space. They also tested maneuvering the spacecraft near other objects, controlled reentry, and several other experiments. The Gemini V mission set the record at the time for the longest crewed orbital flight, with the crew being in space for a total of 8 days. The spacecraft landed back on Earth successfully on August 29th, 1965.
7. The Gemini missions, twelve in total, continued until November of 1966 and were important as they laid the foundation for the first moon landing and greatly enhanced knowledge about what humans can accomplish in space. Other astronauts that participate in the Gemini missions included James Lovell, Neil Armstrong, Edwin "Buzz" Aldrin, Michael Collins, and Richard Gordon.

More Information and Timeline For 1965 Race Riots in the Watts neighborhood of Los Angeles, California
1. August 11th 7.00 PM California highway patrolman, Lee Minikus, arrests Marquette Frye after Frye failed his sobriety tests.
2. August 11th 7.00 PM to 7.23 PM Crowd of a few hundred gathered around the scene
3. August 11th 7.00 PM to 7.23 PM Additional Police are bought in for crowd control
4. August 11th 7.23 PM Patrolman, Lee Minikus arrests three Frye family members Marquette, his brother Ronald, and their mother
5. August 11th 7:40 PM Police leave the scene with those they have arrested leaving behind an angered, tense crowd
6. August 11th 8.00 PM to Midnight angry mob goes on rampage including stoning cars and threatened police in the area.
7. August 12th Black leaders including preachers, teachers, and businessmen try to restore order in the community
8. August 13th Rioting continues with an increase of looting and arson with 100 fire brigades trying to put out fires started by rioters
9. August 13th 14,000 national guardsmen are called in and join the police trying to maintain order on the streets
10. August 14th Lieutenant Governor Anderson appeared on television announcing the curfew which made it a crime for any unauthorized persons to be on the streets in the curfew area after 8:00 p.m
11. August 15th riots and vandalism end
12. August 17th Governor Brown lifts the curfew
The riots ended with 34 dead and 1,032 reported injuries, including 90 Los Angeles police officers, 136 firemen, 10 national guardsmen, 23 persons from other governmental agencies, and 773 civilians. More than 600 buildings were damaged by burning and looting and