Welcome Classmates ....this site is under construction to update things now that the party is over!! We intend to keep this up so check back and see whats new ... we'll get more photos up soon ... 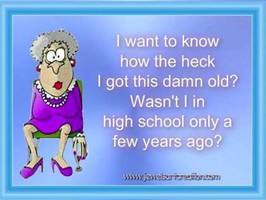 we were all counting the days until graduation ... we all couldn't wait to get on with our lives. And now you look back on those last few weeks of high school with great memories and past friends.

We were the beginning of the "Baby Boomer" gerneation. And now we are the begining of the Baby Boomer "Retirees"! I'm sure you are thinking the same thing I am, "How did I get here so soon?" Let's get together and reminisce of the days that were and where we all are today.

Please join me and your many of your classmates to celebrate our 50th Reunion on August 7th  2015.  Send in the form in "Contact Us" and we will get you all the information.

Thank you and I look forward to seeing you on the 7th ...

Arlington Heights (population 76,422) is located in northeastern Illinois in the northwestern portion of Cook County. The town was incorporated in 1836, making it one of Illinois oldest "villages" as well. When first established, the thought of ever becoming a "suburb" was not even considered. However, with the many travel innovations over the next 100 years, Arlington Heights expanded to become one of Chicago's biggest suburbs.

When the first high school building was built in 1922 for Arlington Heights to accommodate its' 101 high school kids, thoughts did not comprehend the immense future growth the town would have. By the late 1950s, the high school-aged population had grown to well over 2000 students. Plans were soon made to build a new high school to relieve the pressure on the many-times expanded Arlington High School. In 1962 Forest View High School was created.

Kids who attended Forest View High School in 1986 were given the choice of attending Elk Grove, Prospect, or Rolling Meadows high schools.

Here's a little Factoid ..The Falcon was the bird that inspired the centuries old proverb, "A bird in the hand is worth two in the bush"  . The Falcon, which in the days of medieval falconry was worth more in the hand than two birds (of prey) in the bush. ...thanks for that tidbit John!!!